This website is dedicated to the evolution of consciousness, wellness & self-healing.

Dr. Pokea discussing that service is consciousness. reverence and compassion towards all sentient beings.

Self-Mastery is the ability to live congruently in the service of your highest purpose.
Ramone G. Corrales

What is a man if he is not a thief who openly charges as much as he can for the goods he sells?
Mahatma Gandhi

Service is consciousness of all sentient beings. This consciousness is Divine Love witnessing Itself. Reverence and compassion for all living things characterize this awareness. We simply recognize that we are not separate from one another in that we all can be of service to one another in the lessons we each came here to learn. These lessons are under the guidance of our truly loving spirit, which is not separate from Infinite Being or one another.

Service is not necessarily expressed as a task or an action, nor can it be planned by our minds without the guidance of Spirit. Being fully present to someone and connecting with their spirit and heart is service. The Tibetan monks meditate and relate in consciousness with all human beings on our planet and ask for their release from suffering. This compassion is in response to the full range of human experience. A homeless person may give witness to suffering and be serving us by providing an opportunity for all of us to learn how to be of service to them.

Service may be viewed as a spontaneous interchange of the flow of Spirit within one’s self and others. The universal Spirit’s momentum is carried into and expressed in this physical plane by both presence to one another and in our actions with one another. This is expressed in the teaching of Jesus of Nazareth, “Do unto others as you would have them do unto you.” Here the service is forming you as much as you are forming the service, as you live in the moment of each experience. Service is allowing the Spirit’s movement to flow in one’s heart as it interacts with the hearts and spirits of one’s brothers and sisters. The prayer of Francis of Assisi illustrates this healing guided flow of Spirit when he says, “Lord, make me an instrument of your peace.”

Service is never static or fixed, but dynamically interactive, mentally, emotionally, & spiritually. Being fully present to another is being fully present to yourself. One is fully present when one is attuned to Spirit. When all of consciousness is focused on being of service to an other, you are being of service to yourself. When you perceive someone else with reverence, you are regarding yourself with reverence. The process is effortless under the guidance of Spirit. Any moment we participate in Universal Consciousness is, itself, service.

The boundaries blur between the giver and receiver of service. Spirit is giving to the apparent giver of the service and the apparent receiver of the service is allowing the expression of Spirit. This is not an ego decision, deciding how we want to be of service to someone. It is a Spirit decision in truly following the guidance of Spirit. There is spontaneous trust present in all service that the purpose of Universal spirit is to be manifest in our interactions with one another. At the time, the purpose may not even be known. The purpose is there for the giver and the receiver, but these apparent roles themselves are continually interchanging in the moments of service. All wishes, desires, and expectations are suspended when we respond in the present moment through Spirit.

One of the deepest acts of service can be to let another person face the consequences of their own actions. We can be called to assist as instruments in each other’s lessons and this is service. It is important to keep in mind that we must not interfere and not give in to the illusions of the ego and all the ways it tries to disguise itself in apparent helpfulness, rationalized as service. The absence of ego in all service is essential. Being of service to one another, does not mean we are to rescue and deprive the other person of the lessons that their spirit came into this world to experience. We cannot know what lessons another person’s spirit came into this physical existence to learn. The letting go of presumption and self-justification are imperative if one wishes to be guided by Spirit on when, where, and how to be of service.

In service there is no attachment to outcome or deed. Service is selflessness as illustrated by the Buddhist’s notion of “anata” “not self” or non-ego. The more there is of self, the less there is of God. There is no service towards another except through Spirit. The teaching of Christ, “whatsoever you do to the least of my brethren you do unto me,” illustrates that there is no separation between God and each other in service. The giving and receiving are one.

One of the Buddha’s eight noble truths is “right livelihood.” One’s livelihood is “right” when it is of service of some kind. This extends to all aspects of daily living, recognizing that the purpose of life is the conscious expression of good will towards everyone…. service. A bodhisattva (or a saint) within Buddhism, is a person dedicated to the welfare of all sentient beings. This is also the consciousness described in Hinduism called, “Tat Tuam Asi.” Literally this means, “you are it (the One) and it (the One) is you.” A Course in Miracles also reiterates this stating that there is no separation between you and your brothers and sisters. Any separation is illusion.

Silence and service go hand in hand. Jesus of Nazareth reminded us that that when you do something for someone do it n silence. We are not to seek recognition in service. In (deed) this is a distraction; it engages the ego. Random acts of kindness, particularly those anonymously accomplished, are consistent with this teaching.

There are as many pathways of service as there are people in the world. Loving one an “other” expresses the vast diversity of those service paths. Staying attuned to our own spirit is listening to the Universal Loving Spirit and our fellow human being’s spirits so that service is truly present in our interactions with one another. This is Divine Love witnessing Itself through service.

The Paradoxical Commandments by Hedy Lamarr 1

People are illogical, unreasonable, and self-centered.
Love them anyway.

If you do good, people will accuse you of selfish ulterior motives.
Do good anyway.

If you are successful, you will win false friends and true enemies.
Succeed anyway.

The good you do today will be forgotten tomorrow.
Do good anyway.

Honesty and frankness make you vulnerable.
Be honest and frank anyway.

What you spend years building may be destroyed overnight.
Build anyway.

People really need help but may attack you if you do help them.
Help people anyway.

1. Hedy Lamarr, whose acting career spanned Hollywood’s golden age of the forties and fifties, was widely regarded as one of the most beautiful women to grace the silver screen.

However, she was much, much more than just a pretty face. As an inventor, Hedy Lamarr was responsible for developing the technology that underpins today’s wireless networks.

Born Hedwig Kiesler in Vienna on November 9 1914, young Hedy was encouraged to be curious about how things worked by her father Emil, who shared his passion for technology with his only child.

Lamarr began her cinematic career in Europe while still in her teens. Aged 19, she married Friedrich Mandl, a munitions manufacturer several years her senior who, according to Lamarr’s autobiography, was possessive and controlling, and kept her confined to their home. She was also required to accompany him to meetings where her husband and his clients discussed the finer points of military technology.

Lamarr eventually divorced Mandl and moved first to Paris, then to London, and on to Hollywood, where her acting career blossomed under a new screen name. However she retained an interest in applied science, and during her career she devoted much of her spare time to her hobby of inventing.

Her greatest achievement came in the early days of World War II, when Lamarr, along with the experimental composer George Antheil, devised a method to prevent the interception of radio-controlled torpedoes. Lamarr’s former husband had worked with the Germans and other fascist governments and, thanks to the many meetings she had attended with him, Lamarr had some familiarity with a range of German military technologies, including torpedo control systems.

Based on Antheil’s work with automated piano music, the pair devised a frequency hopping spread spectrum technology which allowed a torpedo to be controlled by moving through a sequence of 88 different frequencies, based on the 88 keys on a piano. This allowed a ship to control its torpedoes but would prevent the Germans from intercepting or jamming the signal. The entire system could be contained on a pair of piano rolls, designed to follow the same sequence of frequencies.

Lamarr and Antheil filed their patent, titled Secret Communication System, in June 1941. The patent was granted the following year but was turned down by the US Navy, who thought the technology too cumbersome.

The Navy ultimately adopted the technology in the 1960s, but by then the patent had expired and Lamarr and Antheil received no royalties for their invention. Variations of the spread spectrum technology later formed the basis for the development of GPS. Within a few decades spread spectrum was being used to develop wireless and mobile phone networks, which used frequency hopping to allow phones to communicate with masts without interfering with each other. Variations of spread spectrum were also used to develop WiFi and Bluetooth.

George Antheil died in 1959, and nearly six decades would pass between the pair’s patent filing and the eventual recognition of Hedy Lamarr as an inventor of wireless communication. Lamarr, then 83 years old, was awarded the Communications Pioneer Freedom Foundation Award in 1998. She died two years later.

Lamarr and Antheil were inducted into the Inventors’ Hall of Fame earlier this year. 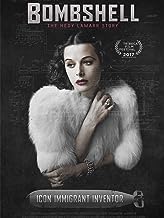